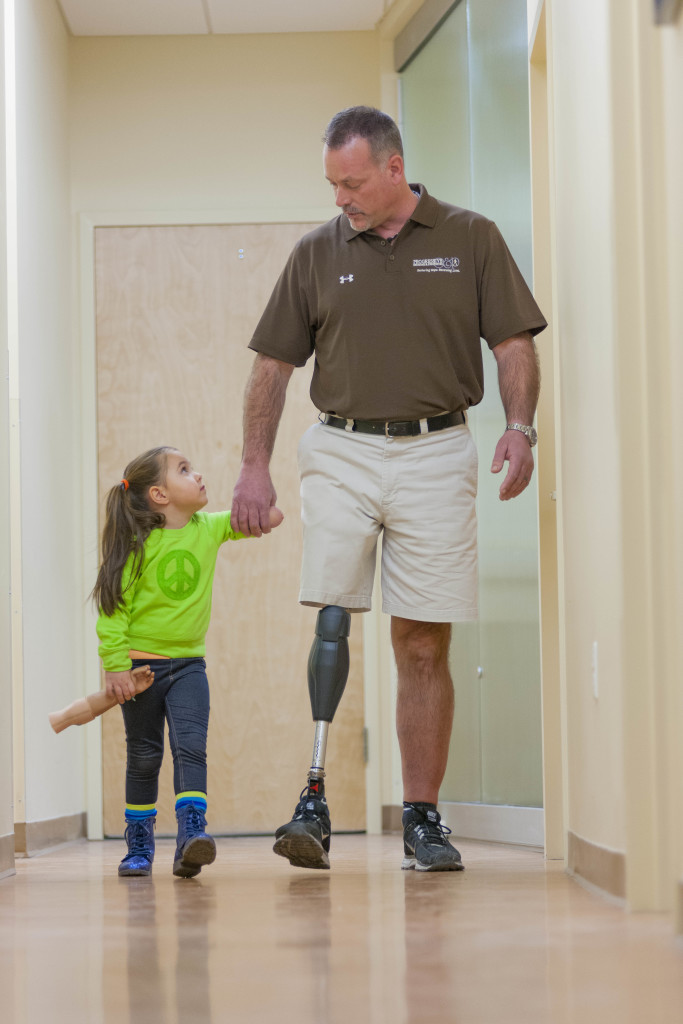 Osseointegration is the scientific term for bone ingrowth into a metal implant. It is a surgical process in which a bone-anchored artificial implant is permanently joined and integrated into a person’s natural bone. The patient’s own bone grows into the implant to become integrated. Osseointegration is best known in the widely used health applications of dental implants and joint replacement surgery, in which it has been very successful for decades.

Today, amputation reconstruction specialists at HSS are using osseointegration in limb replacement surgery for amputee patients who have not tolerated or do not want to use a socket. This is a major advance in amputation surgery of both the lower and upper extremities.

HSS was the first hospital in the United States where osseointegration is being used to treat people who have had transtibial amputations.

Who is a candidate for osseointegration limb replacement?

This type of surgery is especially helpful for amputees who are not doing well with their socket. When the residual limb is short, wide , scarred, or painful, the use of a socket is often fraught with difficulty. Socket problems include pinching, sweating, pain, poor fit, and poor ability to control the prosthetic limb.

What are the advantages over traditional prosthetic limbs?

Bone-anchored prostheses have shown to lead to better patient outcomes than standard, socket-based prostheses. There are many common problems associated with sockets, which an osseointegrated prosthesis can reduce or eliminate. These include:

In traditional prosthetic leg systems, there can be a poor fit between the residual limb and the socket. Many patients experience significant changes in size and shape of their residual limb during the first 12 to 18 months after amputation surgery.

In addition, the angle at which the remaining leg bone rests inside a socket is often, at an angle to the prosthetic leg. This is called malalignment. Such awkward angles can cause balance problems and poor energy transfer. This can make it difficult for patients to move well, and can even lead to falls and fractures.

Other problems associated with point of contact with a socket include sweating, skin irritations or lesions and exacerbated nerve pain. Many amputees experience nerve pain in the residual limb, which is caused by a neuroma . This can be described as “phantom” leg or arm pain. In most cases, wearing a socket puts pressure on the remaining section of the limb, which worsens this nerve pain.

With osseointegration limb replacement surgery, a custom-made limb prosthesis is directly connected to the skeleton by way of an implant that is aligned with the bone of the residual limb (for example the femur or thighbone, tibia or leg bone, humerus or upper arm bone, radius and ulna or forearm bones). This eliminates all the problems associated with sockets, leading to:

Direct skeletal connection between the prosthesis and the patient’s own bone improves energy transfer, strength and stability. Patients have better control over the prosthetic leg or arm.

In particular, patients who have an osseointegrated prosthetic limb have dramatically improved proprioception, called osseoperception, Touch vibrations to the implant (such as during impact with the ground while walking) can be transferred through to the person’s natural bone. This provides significantly enhanced mechanics, physical stability and energy transfer as compared to standard limb prostheses. The result is that patients feel more connected to the prosthesis not only functionally, but also emotionally. Additionally, individual types of prosthetic limbs designed for different purposes can be easily connected to and disconnected from the implant abutment using an Allen wrench (hex key) or, with some designs, quick-connect hardware.

New surgical procedures to alleviate the pain associated with amputation neuromas can now also be performed together with osseointegration surgery. These include:

In arm and hand patients, the large harness and socket often used in upper extremity prosthetics is eliminated. This enables the patient to actively use their own body’s natural shoulder and elbow movement.

Osseointegrated arm implants are also compatible with myoelectric prostheses , in which muscle twitches in the residual arm communicate with the arm prosthesis to allow you to actively move your prosthetic elbow, wrist and hand. New technologies use pattern recognition algorithms to relay, in real time, muscle movement signals from the residual limb to your brain and then back to microcontrollers that allow you to control the movement of a bionic (robotic) prosthetic arm or hand. In some cases, TMR is used to enhance the muscle signals.

How does osseointegration surgery work?

The process begins with front- and side-view X-rays and CT scans of your limb to determine precise measurements for your custom-made implant. After measurements are gathered, a precise custom-made prosthetic implant is built to fit inside your bone. The implant is then inserted into residual limb bone, and connected to a dual post (AKA dual cone) that, on the other end, connects to a prosthetic limb.

During surgery, we address the neuromas and soft tissues. We perform soft-tissue contouring that usually involves removing, lifting, and tightening excess and loose soft-tissue.

At HSS we have assembled an interdisciplinary team of healthcare practitioners for osseointegration patients. The team effort cannot be underestimated, and each person plays an essential role in ensuring the best outcomes for patients.

What is the recovery time for osseointegration surgery?

Osseointegration patients can expect to spend an average 3-4 days in the hospital. Generally, our patients are out of bed the next day, when we will apply a rubber footie to the end of the abutment and begin a gradual loading program. A gauze wrap will be applied to the limb abutment for a few weeks and patients can begin a daily shower and cleaning of the stoma with soap and water four days post-surgery.

Gradual loading of weight will take place over several weeks, during which time patients use crutches to prevent from putting full weight on the limb. We start with 20 pounds for 10-15 minutes four to six times per day and increase gradually until the prosthetic leg is attached. In- patient physical therapy begins the day after surgery, and is followed by outpatient therapy once the patient is discharged from the hospital. Prosthetic leg will be attached from three to ten weeks after surgery, depending on bone quality. Crutches are used for 6 weeks after the leg is attached. The actual growth of bone into the implant takes time, but can be expected about 3 months after surgery.

The total average recovery period – the time by which most patients can be walking without crutches – is approximately three months after surgery.

What are the risks?

As with any surgery, osseointegration carries with it a risk of infection. However, severe infections, fracture or loosening of the implant are very rare.

If you should fall after receiving your osseointegrated implant, a designated breaking point in a section of the prosthesis will prevent both injury to your bone and damage to the implant. Like ski bindings that release during a fall, the connection between the implant and the prosthesis has a fail safe mechanism to protect the bone and implant in case of a severe fall

How long does an osseointegrated prosthesis last?

An osseointegrated prosthesis offers an excellent long-term outcome. This procedure has been performed in Sweden since 1990. The implant lasts for many years after successful osseointegration with the bone although connection parts may need to be changed by the prosthetist. The implant designs have improved in recent years and we expect these to function well over decades. The need for revision surgery is possible in cases of fracture, loosening, or deep infection, but complications like this are rare.

A brief overview on osseointegration from Dr. Rozbruch:

Randy shows the benefits and advantages of osseointegration: