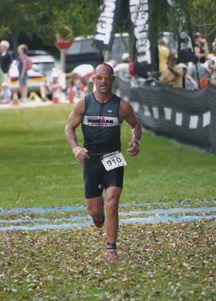 I would like to take this opportunity to extend my sincerest thanks to you for all of the wonderful care to which I received over the past year. I came to your offices pretty banged up, bowed legs, cartilage worn to the bone after 3 medial meniscus surgeries, and in constant pain in both knees. Many doctors took one look at me and said I needed double knee replacements at age 46 and that I would never run again. Dr. Rozbruch gave me the option of undergoing a high tibia osteotomy of both legs to correct my bowed legs.

Both surgeries were a complete success, and I not only have been able to live pain free but I can run again. Just 5 months after my last external fixator was removed I competed in several races including a Half Ironman Triathlon, which consists of a 1.2-mile swim, 56-mile bike ride, and 13.1-mile run. I had a great race, placing 5th in my age group and 50th overall out of 1000 competitors. I have enclosed a picture taken during that race. Thanks to Dr. Rozbruch and his staff, my future in racing is bright and I am now training for my eleventh full Ironman in 2012.