Ten years ago I decided I had to do something about my right leg. I was suffering severe pain and avoided walking even the shortest distances. My lower leg was becoming more and more crooked; I fell often, sometimes tearing ligaments. I had undergone reconstructive surgery on this leg 30 years earlier correcting the damage from recurring bone tumors and radiation treatment. For most of my adult life I had functioned well, walking with a mild limp and limited knee action but the effects of age and wear had set in earlier than I had imagined. And my leg had returned to its more deformed position with the knee cavity more arthritic and fused.

Armed with my x-rays I conferred with orthopedic Docs in Boston and Providence area and presented my unusual case. No one could articulate a solution nor was anxious to do anything proactive. “Leave well enough alone” was the general tenor.  One specialist kept shaking his head as he studied the films. “It’s amazing you can walk…” were the most positive words he offered.  My pain had gotten so bad I began to think amputation might be an option. 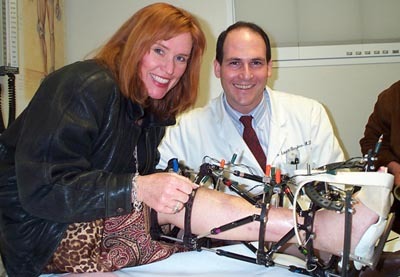 I was a little discouraged and conflicted about having surgery. It had taken up so much of my early life and I knew all too well all the ramifications of leg surgery and recovery. I realized that I needed more than a lukewarm “Well, we could try this or try that”…and it would require someone who was game for the challenge…willing to do something that perhaps hadn’t been done before.

Having grown up in the metro NYC area, I was familiar with the top reputation of the various city hospitals, so I wrote the Chief of Surgery at HSS with my case. I was referred to one of their senior surgeons who, after a brief review of my case, suggested that Dr. Rozbruch might best treat me, and he arranged for me to be seen that same day.

When I was ushered into Dr. Rozbruch’s office, I have to be honest, my heart sank. My first thought was that my situation was so hopeless that I had been given to “The Kid,” “Doogie,” or was in some version of the TV commercial, “Let’s get Mikey to do it.” Dr Rozbruch appeared so… Y O U N G . I quickly scanned the office wall for diplomas, did some quick calculations and tried not to let the sinking hopelessness creep back or show on my face. But his credentials were obviously outstanding and experience reasonable so I sat back and started my appeal for a better leg…not perfect, just better.

Dr. Rozbruch didn’t speak to any solution that day, but I immediately knew he was tuned in and listening to me and not distracted by the x-rays. Aside from the obvious information of how the leg functioned, I wanted him to understand what I could live with, and what I couldn’t. For example, my foot was in an arched position and so higher wedge or heels were my most comfortable shoes. Fixing it wasn’t on my list. At 5’2” I had no intention of wearing flat shoes. He listened patiently and was never dismissive of my concerns, input or observations.

When I returned, Dr. Rozbruch presented a thorough plan to straighten my lower leg, replace the knee and part of the femur and align the leg to a more normal position. I had braced for another version of “not worth your while.” So knowing he had some kind of solution was a pleasant surprise. But what stood out even more and made the biggest impression on me was his genuine enthusiasm. Refreshing, given all the other surgeons’ doom and gloom, and [it was] downright infectious. I said I would think about it, but I left knowing I was on-board.

During treatment Dr. Rozbruch made time to answer the most extraneous questions or anxious concerns and I relied on his unwavering confidence to stay positive through my procedures. By the end of my treatment, my leg was more functional than it had been for over 30 years. It looked almost normal and most of the pain had been eliminated. It was more than I had ever hoped for.

When I think back, I realize there were so many times I was ready to give up and resign myself to a compromised lifestyle. Without Dr. Rozbruch’s resoluteness about the improvements he could make, I probably would have stopped searching for a fix and just tried to accept it.

Very few surgeons combine their surgical training with true consultative and compassionate patient care. But I was lucky enough to find one and I will be forever grateful.