I was an ardent yoga practitioner for many years and avid hiker until black ice brought me down. Not in an ashram or on a mountain but right on Fifth Avenue and 13th St., where I taught at Parsons New School for Design. I came to on the sidewalk, watching impatient passersby avoid me. It wasn’t until a gentlemanly psychiatrist from London covered me with his coat that I realized what had happened — a broken kneecap — and that I couldn’t get up.

After my first surgery with a doctor from a different hospital, my knee joint filled with scar tissue. After another surgery called “manipulation under anesthesia” where my knee was forcefully bent to break up scar tissue, I was left worse than before, with a semi-repaired kneecap and ruptured patellar tendon. I could neither extend my leg nor bend it more than 50 degrees.

I had no hope of ever walking unassisted again. But my physical therapist helped me find the doctors 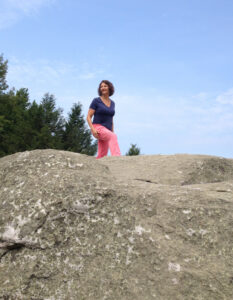 who gave me a new life. Dr. Robert Rozbruch and Dr. Russell Warren decided to perform 2 surgeries on my knee that they had only done a half dozen times before. While those are words a patient never wants to hear, I wanted desperately to walk and they were my only hope.

Dr. Rozbruch framed my knee with a halo that he designed to help ease my kneecap and quad tendon back into place. Then, in another surgery, Dr. Rozbruch removed the frame and Dr. Warren put in a donor kneecap and tendon.

But none of this tells the greater story of how supportive and compassionate Dr. Rozbruch was during the process. How I could rely on a quick response from him or his staff to any question or concern I might have.

I once thought I would never cross the street without crutches again, but now I’m back on the mountain.